The city of Santa Clarita is the third largest in all of Los Angeles County, Ca. and includes the communities of Newhall, Valencia, Saugus and Canyon Country.  It is shaped like an inverted triangle with Newhall and Valencia on the lower left, Saugus at the top and Canyon Country on the right. 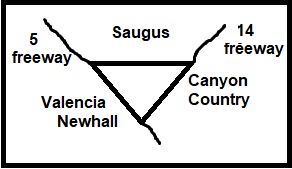 The community of Saugus is located in Santa Clarita, California. Directions: Take the 5 freeway north heading to Sacramento and then exiting right on Valencia Blvd. After two miles, turn Left on Bouquet Cyn Road about 3 miles. After passing Seco Canyon Road, you will be entering Saugus! It’s one of four communities (along with Valencia, Newhall, and Canyon Country) that merged in 1987, to create the city of Santa Clarita.

How Saugus Got its Name

First of all, Saugus is named after a town called Saugus  located on the east coast of the U.S. in Massachusetts.

Saugus, Massachusetts was the birthplace of Henry Newhall

So Henry Newhall at one time owned about 40,000 acres stretching from present-day Saugus all the way down the Ventura highway to modern day Santa Paula. (About 20 miles!)

He needed to name the town something because he intended to build a hotel at the railroad stop. That hotel and restaurant was called The Saugus Hotel and the Saugus Cafe.

Fun Fact: The Saugus Cafe,  is still standing! It is among the oldest restaurants in Los Angeles County and patrons still flock to sample the tasty food that has been served there since 1887.

Want MORE fun statistics from Wikipedia that were gathered in 2001? Here ya go!

Bob Boog Realty has listed and sold several homes and townhomes in the Saugus area.

We use cookies on our website to give you the most relevant experience by remembering your preferences and repeat visits. By clicking “Accept”, you consent to the use of ALL the cookies.
Cookie settingsACCEPT
Manage consent

This website uses cookies to improve your experience while you navigate through the website. Out of these, the cookies that are categorized as necessary are stored on your browser as they are essential for the working of basic functionalities of the website. We also use third-party cookies that help us analyze and understand how you use this website. These cookies will be stored in your browser only with your consent. You also have the option to opt-out of these cookies. But opting out of some of these cookies may affect your browsing experience.
Necessary Always Enabled
Necessary cookies are absolutely essential for the website to function properly. These cookies ensure basic functionalities and security features of the website, anonymously.
Functional
Functional cookies help to perform certain functionalities like sharing the content of the website on social media platforms, collect feedbacks, and other third-party features.
Performance
Performance cookies are used to understand and analyze the key performance indexes of the website which helps in delivering a better user experience for the visitors.
Analytics
Analytical cookies are used to understand how visitors interact with the website. These cookies help provide information on metrics the number of visitors, bounce rate, traffic source, etc.
Advertisement
Advertisement cookies are used to provide visitors with relevant ads and marketing campaigns. These cookies track visitors across websites and collect information to provide customized ads.
Others
Other uncategorized cookies are those that are being analyzed and have not been classified into a category as yet.
SAVE & ACCEPT